Dear reader, my last few days in Cambodia i spent reading, laying around and preparing to fast at the Beaches of Phu Quoc (Vietnam)
I enjoyed doing nothing, but i felt alone in a crowd…anyhow, that was about to change when i started to live on the beach.
But first things first.

a Cambodian Tuktuk…if it would be street legal in Germany? 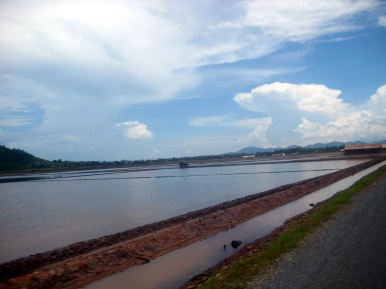 Crossing the Vietnam boarder.
The road was not paved, a bumpy dirt road in fact, saline fields on both sides, the sea recognizable in a little distance.
The Cambodian border patrol cared little for us, we were leaving their country after all.
But it also made the impression, they don’t really care for the Vietnam side as much as for the Thailand side.
I guess they are just low on cash.
In the 500m in between the boarders one could see one lonely casino, but the huge building side behind it were showing the arrival of a bigtime investor.
The Vietnamese boarder was as pompous as one would expect from a proper communist country 😉
It was the first time in 10 boarder crossings that i have been asked for my vaccination passport, or should i say nobody asked, but it saved me paying 1$ because i am vaccinated against yellow fever.
And then i was in Vietnam.

By Coincidence i had heard of the Island Phu Qouc, which is situated near Cambodia and i thought it would be the perfect spot to camp at the beach.
I took the bus from the ferry port to the other side of the isle, but it was so full of guest houses and resorts, i couldn’t enter the beach without standing on somebody’s private property.
So i hitchhiked back to Ham Nien, the local fishing town, where i saw a nice beach from the ferry.
Turned out it was full of trash…but that doesn’t matter i am used to trash by now.

(before that the restaurant where i desperately tried to eat soup WITHOUT noodles, thought i must be dirt poor and gave me 2 free noodle soups with vegetables and crab..thank you but that is not what i wanted 🙂 i ate it anyways as i was to hungry to say no to this temptation 😉 )

So i set up a camp, and bought a 21l canister of drinking water.
Very well i thought, i was satisfied with my work.
A camp in a lost house ruin, save of winds and rain (thx to my tarp)
The next day i cleaned out the floor as i wanted to stay here for a week, only drinking water and eating coconuts as a detox before going to the phillipines…and then it happened
A group of cheerful Vietnamese guys arrived, with bags of rice wine, a plate of fried squid and some fruits.
No english being spoken they invited me to them and to eat squid with them….and to go to the waterfall with them…and they bought lunch for me…and they tried to find a place to sleep for me…and..hey hey hey stop! I am not a beggar i just wanted to stay on the beach! don’t do that!
Well it is hard to communicate that if i don’t speak vietnamese and they don’t speak english.

So i “had” to go with one of the guys which turned out to be a good decision, it rained and thundered terribly in the night!

I found out what i did “wrong”, in the big group of drinking people one of them asked me “money?”
i said “little” and made gesture with thumb and indexfinger (i didn’t want to look out for my stuff like a hawk for the week..i wanted to relax a little)
So from there, the one guy with the little english vocabulary declared me a beggar to the others…done! 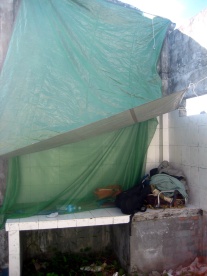 chicken rice soup at the waterfall

the view from my camp

magroves…plastic bags wrap around their roots

some body didn’t make it

eating with the whole family, and the rest of the family

Going to dive for mussels

4 people on one skeleton of a bike

a deep hole in the waterfall…i could stand in it

I ate all different kinds of food, from fresh springrolls over different kinds of snails to barbecue Cat (starting at cutting the head off, skinning it and chopping it into pieces…it tasted good but it felt very weird!)
And experienced, that vietnamese culture is about eating food, drinking and talking…well to bad i don’t drink and don’t speak vietnamese…so i broke my fast and at least ate.
I ate a lot…
Partly because everybody wanted to feed the whiteman, because i didn’t know what else to do with a table full of food and because of the way i was raised:
when you get something to eat, you eat up. The people here, take a bite leave it for an hour or so and take the second bite…i tried, but my conditioning just goes to deep.
But i had a lot of fun and experienced as much as earthly possible in these 7days.
One thing though was not nice.

Shifting Baselines (i will call them SB)
What are these?
It means that people have after a certain time in a special condition a different feeling for what is normal. A survival trait which is really handy if you go off to new environments.
BUT
And here i go again, it is also dangerous. Its the boiling frog principle.
There are plastic bags everywhere. 50 years ago there was one, and with time the amount increased, but nobody seemed to notice, because it went so “slow”.

We can see SB in Climate Change, SPF of sunscreen, Prices of Gasoline, the amount of fish in the ocean or in the rights facebook has over your creative property ( 😉 )

We are not made to detect longterm changes